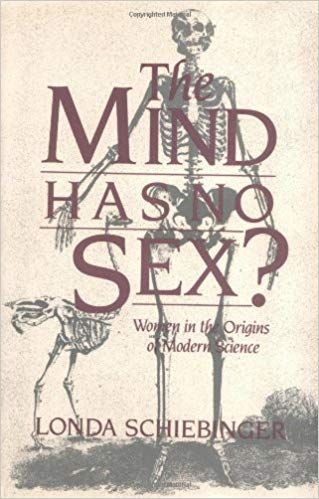 Londa Schiebinger's book, The Mind Has No Sex? Women in the Origins of Modern Science was supported by an NEH research fellowship. Image courtesy of Harvard University Press.

Londa Schiebinger’s first book, The Mind Has No Sex? Women in the Origins of Modern Science (1989), documents that women were willing and ready to take their place in science in the seventh and eighteenth centuries, and how the restructuring of science and society in what historians identify as the Scientific Revolution led to their exclusion. Schiebinger’s book, which was supported in part by a grant from the National Endowment for the Humanities, has been translated into seven languages. Her work has had a long-lasting impact on research policy at the U.S. National Institutes of Health and the European Commission, ensuring that scientists integrate sex and gender analysis into their research design.

Schiebinger receives a research fellowship from the National Endowment for the Humanities.

Schiebinger receives a summer fellowship from the American Council of Learned Societies.

The Mind Has No Sex? is published by Harvard University Press.

Nature's Body: Gender in the Making of Modern Science is published by Beacon Press.

Schiebinger receives a fellowship from the National Institutes of Health, National Library of Medicine.

Has Feminism Changed Science? is published by Harvard University Press.

Plants and Empire: Colonial Bioprospecting in the Atlantic World is published by Harvard University Press.

Schiebinger contributes to Gender, Science, and Technology, a major report for the United Nations.

Schiebinger receives a grant from the European Commission for Innovation Through Gender.

Schiebinger receives a second grant from the National Institutes of Health.

Gendered Innovations: How Gender Analysis Contributes to Research (edited with Ineke Klinge) is published by the European Union publications office.

Secret Cures of Slaves: People, Plants, and Medicine in the Eighteenth-Century Atlantic World is published by Stanford University Press.

Schiebinger receives a second grant from the European Commission.

In the decades since the publication of The Mind Has No Sex?, Schiebinger has expanded her research on the history of gender, race, and science. She now directs Gendered Innovations in Science, Health & Medicine, Engineering, and Environment, a global project that has brought together over 200 natural scientists, engineers, and gender experts in a series of collaborative workshops. In a recent Nature comment, she and a colleague document how gender and ethnic bias is reproduced through machine learning and discuss how big data can be checked for bias and, when that fails, how algorithms can be debiased. Schiebinger’s work has had an impact on public policy and scientific research in the U.S. and across the globe—she has served as an advisor to the National Institutes of Health (NIH) in the United States, the Canadian Institutes of Health Research, the European Union, the Republic of Korea’s new Gendered Innovations Research Center, and the Japanese Science and Technology Agency, among many other organizations. In Spring 2019, she spoke at the Academy of Science in Rio de Janeiro, Brazil.

And though Schiebinger has published a great deal of research since The Mind Has No Sex?, she emphasizes that all of her work was born out of this early book and the fellowships that accompanied it. Through its willingness to fund innovative new research, the NEH in particular helped Schiebinger establish a career at a time when gender and science wasn’t considered an academic discipline. “Without this fellowship,” she said, “I wouldn’t have been able to get a first job.” But Schiebinger also points out that her work on our twenty-first century period is borne out of her research into the eighteenth century, during which many of the assumptions we still make about gender and race were being established. “We live in the shadows of the scientific revolution” in Western science, she says. What is more, Schiebinger’s knowledge of how gender and racial biases were formed in the eighteenth century is helping others avoid the same pitfalls. By helping scientists and engineers understand how bias can shape their research design studies, Schiebinger’s work is helping researchers get the science right from the beginning, saving lives and money, enhancing social equalities, and making science more responsive to society.