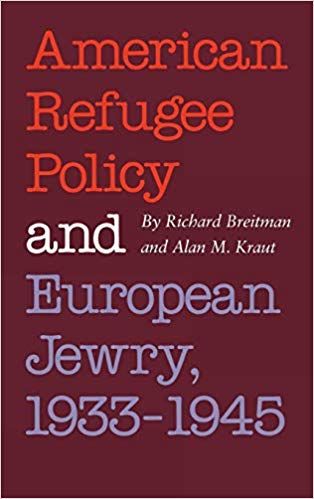 With NEH support, Alan Kraut published two books: American Refugee Policy and European Jewry, 1993–1945 (1987) and Silent Travelers: Germs, Genes, and the “Immigrant Menace” (1994). The books, which delve into the history of American immigration and refugee policy, have had lasting impacts on academic and public understanding of these issues. Further, Kraut’s expertise in the areas of immigration and refugee policy and the history of public health policy has been sought out by policymakers, the press, documentary filmmakers, and exhibition curators.

Kraut wins an NEH award for research on Jewish immigration to the United States.

Kraut wins an NEH award for archival research on immigration and disease.

Kraut wins an NEH award for research on immigration and disease in the United States.

Kraut testifies before the U.S. Commission on Immigration Reform on health care services and immigration.

Silent Travelers: Germs, Genes, and the “Immigrant Menace” is published by Basic Books.

Kraut co-curates an exhibit at the Ellis Island Immigration Museum on the health inspection of immigrants to the United States.

A Japanese edition of Silent Travelers is published by Seidosha.

Kraut serves on the Committee on Health and Adjustment of Immigrant Children and Families for the National Research Council and Institutes of Medicine.

Kraut serves as historical consultant on The Most Dangerous Woman in America: Typhoid Mary, a documentary that premiered on PBS.

Kraut serves as historical consultant and on-camera expert in Forgotten Ellis Island: The Untold Story of the Ellis Island Hospital, a documentary film.

Through archival sources and analysis of U.S. immigration laws and procedures, American Refugee Policy and European Jewry, 1933–1945 considers why the United States failed to take in more European Jews in the years before and during World War II. Kraut’s work on the book created opportunities for him to work more directly on public policy. Throughout the 1990s, he served as historical consultant to the Office of Special Investigations (OSI) at the United States Department of Justice as OSI worked to investigate former Nazis living illegally in the United States.

NEH funding for Silent Travelers: Germs, Genes, and the “Immigrant Menace” allowed Kraut to master a new field—public health—at the same time that he was undertaking archival research. The book won the Theodore Saloutos Prize for the Outstanding Book in Immigration and Ethnic History and the Phi Alpha Theta Book Award for the Best Book in History by an Established Author. Silent Travelers examines the vilification of immigrant populations in the United States during outbreaks and epidemics, from the cholera epidemic of 1832 to the AIDS epidemic in the 1980s, while seeking to understand the impact of this vilification on public health policy. As a result of this work, Kraut testified before the Subcommittee on Immigration of the Committee on the Judiciary of the United States in 1997 and served on the Committee on the Health and Adjustment of Immigrant Children and Families, a two-year study that was co-sponsored by the National Research Council and the Institute of Medicine. Silent Travelers continues to be cited by the press and Kraut continues to be interviewed in response to current policy debates. And Kraut has contributed to many documentaries with wide public appeal, including A Paralyzing Fear: The Story of Polio (1998) and The Most Dangerous Woman in America: Typhoid Mary (2004). Today, Kraut serves as a Distinguished Professor of History at American University. His insights on the history of immigration continue to be sought out.