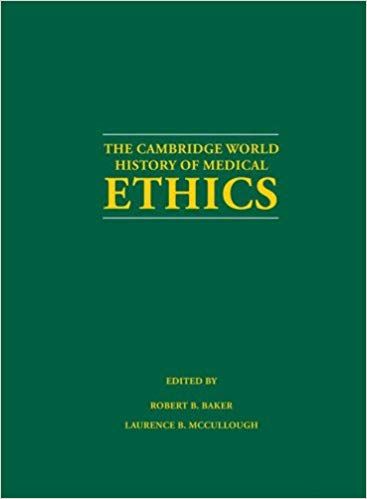 NEH funding supported the development of The Cambridge World History of Medical Ethics, which is now used by medical practitioners around the world. Image courtesy of Cambridge University Press.

With funding from the National Endowment for the Humanities, editors Robert Baker and Laurence McCullough took on a monumental task: creating the first global history of medical ethics. More than a decade in the making, the book is the combined effort of 55 contributors. In 63 chapters, the history provides a solid grounding in both present bioethics and the long history of medical ethics, beginning in 4,000 BCE and ending in 2000 CE. The Cambridge World History of Medical Ethics represents the perspectives and histories of the world’s major regions and religions, provides insights into the experiences of medical practitioners and patients, and considers both modern and historical questions of ethics. Owned by hospital libraries and used by medical practitioners around the world, it is now considered an indispensable resource for providing professional patient care and educating future generations of healthcare professionals. Choice, the official journal of the American Library Association, cited The Cambridge World History of Medical Ethics as “outstanding book of the year in health sciences.”

The United States is a culturally and religiously diverse nation, one where migration patterns bring people of disparate backgrounds into regular contact with one another. The Cambridge World History of Medical Ethics is the only holistic resource that helps doctors, nurses, and other healthcare professionals understand those disparate backgrounds. When patients or their advocates, for instance, site a religious law as a consideration in medical care, chapters on Hindu, Buddhist, Confucian, Orthodox Christian, Roman Catholic, Protestant, Jewish, or Islamic medical ethics can help practitioners understand their perspectives. McCullough used material in these chapters in his work as a clinical ethics consultant. And as Baker pointed out, “the book is in hospital libraries because you need to have this stuff—the patients believe in the material that is highlighted there.”

NEH funding helped the project get off the ground by supporting a weekend planning session for the book’s contributors, with many traveling from across the world to represent their countries and cultures. And the project’s success in the NEH’s rigorous grant process helped the editors pursue additional funding for the project. The prestige of an NEH grant helped the project win six additional awards from other foundations. Ultimately, the editors indicated that the project, however necessary, would have been difficult to get off the ground without NEH funding. “This is a unique project,” McCullough said, “one that would never have happened except for a body like NEH.”